International White Cane Safety Day is an opportunity
to increase awareness about the visually impaired. 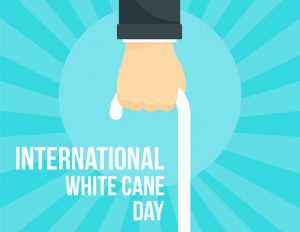 • Signifies that the pedestrian using it is blind or visually impaired;
• Alerts motorists of the need to exercise special caution and provide the user the right of way;
• Symbolizes the independence, confidence and skills of the person who is using it.
• In 1964, the U.S. Congress approved a resolution authorizing the President of the US to annually issue a proclamation designating October 15th as “National White Cane Safety Day.”
•  In 1969, the International Federation of the Blind adopted October 15th each year as “International White Cane Safety Day.”
•  In the United States, it is a national observance, which was first celebrated in 1964, after the proclamation by President Lyndon B. Johnson.

What is White Cane Day? 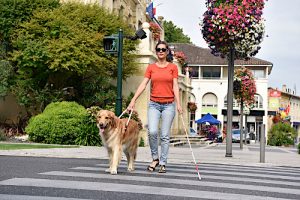 White Cane Safety Day celebrates the achievements of blind or visually impaired people. A white cane is an important mobility tool for such people as well as the symbol of their independence. Canes have been used by blind people for centuries, but the white cane was introduced in the early 20th century. Canes were painted white to be more easily visible.

In the United States, white canes were introduced and promoted by Lions Clubs.

There are different types of the white cane such as long cane (also known as Hoover cane). These include the guide cane, identification cane ID (symbol cane), support cane, and kiddie cane. Not all of them are used as a mobility device.

For instance, the ID cane alerts others as to its bearer’s visual impairment; but is of no help as a mobility tool.

The white cane is one of the symbols of a blind person’s independence. In 2011, President Barak Obama also referred to White Cane Safety Day as Blind Americans Equality Day. 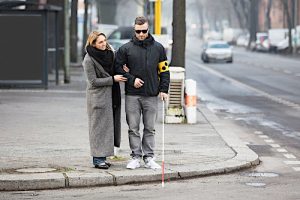 In 1921, James Biggs, a photographer from Bristol, England, became blind following an accident. Because he was feeling uncomfortable with the amount of traffic around his home, he painted his walking stick white to be more easily visible.

In 1930, Lion’s Club member George A. Bonham, President of the Peoria Lions Club (Illinois) introduced the idea of using the white cane with a red band as a means of assisting the blind in independent mobility.

The Peoria Lions approved the idea, white canes were made and distributed, and the Peoria City Council adopted an ordinance giving the bearers the right-of-way to cross the street. News of the club’s activity spread quickly to other Lions Clubs throughout the United States.

Overwhelming acceptance of the white cane idea by the blind and sighted alike quickly gave cane users a unique method of identifying their special need for travel consideration among their sighted counterparts.

Also in 1931, in France, Guilly d’Herbemont recognized the danger to blind people in traffic and launched a national “white stick movement” for blind people. She donated 5,000 white canes to people in Paris.

Today white cane laws are on the books of every state in the US and in a few other countries. These laws provide persons who are blind a legal status in traffic. The white cane universally acknowledges that the bearer is blind. For specific information contact your local government office for motor vehicles.

Resources for the Visually Impaired 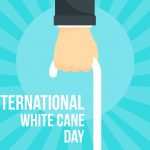